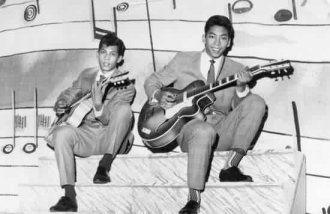 The Blue Diamonds are two Dutch brothers Ruud en Riem de Wolff.
The Blue Diamonds were exponents of the famous Indo-rock scene, the cradle for all Dutch rockmusic way back in the 50's. Inhabitants of the formar Dutch colony Indonesia mixed their rural musical influences with the new rock & roll from the US.

Ruud and Riem were born in Batavia, Indonesia, in 1949 they moved to the Netherlands.
They were so-called Indorockers.
Their breakthrough came in 1959, with their single Till I kissed you, a cover from the Everly Brothers.
Almost all of their hitsingles were covers, just a few were originals. Like many band that time they recorded their own versions of popular international songs such as; Oh Carol, Let it be me and Sukiyaki.
Also their biggest hit was a cover: Ramona.
This song, originally from the 1927 movie Ramona, was original  sung by Dolores del Rio.
In 1960 it became a big international hit for the Blue Diamonds.
In Holland it reached #1, in Germany it reached #1 and Belgium and Norway #2.
It even reached the American Billboard Hot 100: #72.
All over Europa they reached the charts.
Even a Spanish version was released, it became a big hit in a.o. Mexico, Spain and other Spanish speaking countries. 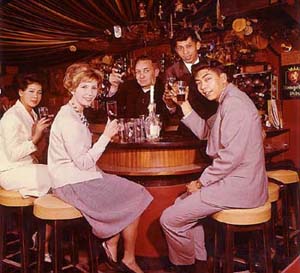 Almost a year later, they released Little ship.
Also this song reached #1 in the Netherlands.
In Belgium's Song Parade it reached #22 and in Germany it was a #30 as Blaues Boot der Sehnsucht.

As they had hits in the Netherlands with songs in English, they adapted their songs for the German market by translating them.
Little ship was already written in 1958 by the successful writers duo Doc Pomus and Mort Shuman. However, nobody wanted to record it, so the Blue Diamonds were the first in 1961.

In the sixties they toured all over Europa, Indonesia, Singapore, Malaysia, Japan, Hong Kong, Shri Lanka and many other countries.

The Blue Diamonds had no more hits after 1971 but they performed until 2000.
Their last performance was November, 2000. After his brother's death (December 2000) Riem wanted to stop performing.

During the following period Riem he realised what 40 years of Blue Diamonds ment for many people.
A good reason, not only to look back but also to look foreward and start a new carreer as a solo artist.

Since 2001 Riem ‘s performing solo (with tape) or live with a band (a.o. Windfall).
On stage he brings a various show with many of his ‘golden’ hits.

The Blue Diamonds are two Dutch brothers Ruud en Riem de Wolff.
The Blue Diamonds were exponents of the famous Indo-rock scene, the cradle for all Dutch rock music way back in the 50's.
Inhabitants of the former Dutch colony Indonesia mixed their rural musical influences with the new rock & roll from the US. 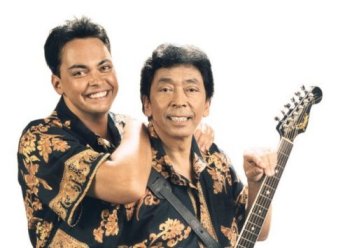 After his brother died Riem didn't want to perform again.
Under pressure from his fans, in 2001 Riemed changed his mind.

Together with his son Steffen he founded The New Diamonds.

In 2001, he recorded the album ‘Out of the Blue’ with his son Steffen as The New Diamonds.
A 'tribute' album to his brother with duets, together with Steffen and many other successful colleagues he met during his career.

This 18 track album contains three emotional songs, written by Riem and Steffen;
"Blauw genoeg geweest / Out of the Blue" (a farewell song to his beloved brother), "Sixty-4" (the house they grew up in) and the significant song "Back on Track" (after a remark from his wife: so, you're back on track).

The typical, special New Diamond Sound is also surprising in five re-arranged aold hits as; "Little Ship", "Sukiyakí", "Breaking up is hard to do" Bob Dylans "I shall be released" and a complete different version from "Ramona". Other songs of this album are nine re-arranged duets with Riem's friends (and colleagues) like Willeke Alberti (Let it be me), Lee Towers (All of me), George Baker (Skinny Ginny), Rob de Nijs (Oh Carol), Johnny Lion (Your mama don't dance), Anneke Grönloh (Love me with all of your heart), Mariska Veres (Close to you), Oscar Harris (Sunny) en George McCrae (Quantanamara) singt.

All the songs belonged to the Blue Diamonds repertoire.

During this project Riem made a tour with his son Steffen as the New Diamonds.

The album was released in many countries (in Belgium a.o. with Rocco Granata).
Many demands for shows followed (also from other European counties).